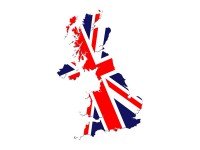 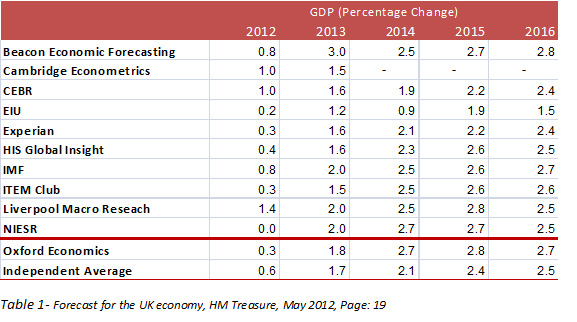 Besides positive expectation of UK economic conditions, if we drill down into the tourism industry, we can clearly see that the UK provides huge opportunities even during economic recession. Travellers from the United Kingdom are the world’s third highest spenders on travel, following Germany and the USA.[2] Besides a huge amount of market expenditure, the British tourism market tends to increase despite the current economic recession. Recent studies show that British holidaymakers’ annual spending increased on their holidays in 2011 by 2%. [3] The same survey from Visa Europe shows that Britons intend to fork out an average of £3,890 on overseas breaks in 2012, an increase of more than £300 on the figure for 2011. [4]

“Despite another tumultuous year dominated by global economic and political events, UK holiday spending has continued to rise to record breaking levels. With this trend looking set to continue into 2012, it demonstrates that time away is still very much a priority and that Visa cards remain central to holiday packing lists.” - Tony Gibbons, Head of Debit at Visa Europe [5] 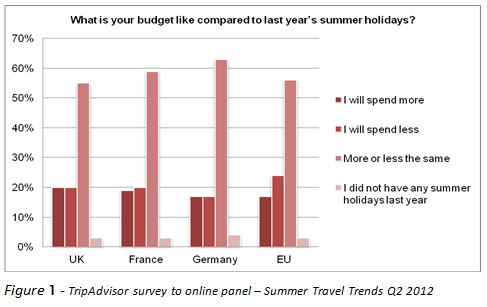 Another recent survey reveals, when asked for a comparison of their budgets for 2012 and the previous year, that while spending levels look flat for Germany and France, UK’s spending level will increase.

Most recent research shows that British holiday makers will continue to be among the world’s major tourism and travel consumers. [Figure 1]

The Internet is changing the World. Before our eyes, the World Wide Web is systematically transforming industry after industry. In the last decade, the internet has become the most important sales and marketing channel for tourism and travel, as with other industries, and has changed its nature. However, not all countries have the same level of online business or life style. Certain parameters such as internet penetration rate and having a credit card directly affect business and life style to varying degrees in different countries. For this reason, the use of the internet for buying or booking tends to be higher in countries that have a high internet penetration level and using credit cards/debit cards, eg UK and Scandinavian Countries in Europe [6]. Recent studies show that almost half of British people (42.6 Per cent) buy something on the internet once a week or more, with a very substantial average order value of over seventy pounds.[7] Another report which was prepared by BCG indicates that about 62 per cent of British adults, or 31 million people bought goods or services online in 2010. Collectively they spent £50 billion in 2009, or about £1,660 each. [8]

“France, Sweden, the Netherlands, Luxembourg, the United Kingdom and Denmark are the countries which are above the EU average in the share of population buying online: at the same time they are growing faster than the EU average. [Between 2008 and 2010]”[9] 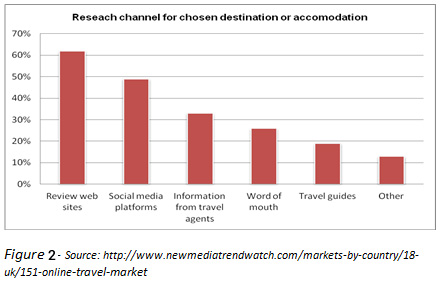 As for the tourism industry, the online booking rate looks higher than market average in the UK. Moreover the internet has overtaken other# more traditional resources when it comes to research before deciding on a holiday destination. [Figure 2]

Besides the increasing importance of the internet as a source for planning holidays, the UK’s online booking has a major position into European Market. “UK online spending will account for 42.8% of total UK travel sales or 25% of the European online travel market by the end of 2010 – the largest share of any EU member country. British consumers are among the most web-savvy in terms of holiday planning, with 69% using the internet to research and buy holidays compared to the European average of 54%. (EyeForTravel, April 2010)”[11] In addition to a high total online expenditure percentage, the UK (47%) overtook Scandinavia (46%) by a small margin in 2010 in terms of online travel penetration. However, the size of the UK’s total travel market makes it by far the largest online market in Europe, comprising 28% of total European online leisure/unmanaged business travel gross bookings in 2010. [12] The same report, which was prepared by ProCusWriting Inc, projects that UK will keep its leading position in 2013 as well. [Figure 3] 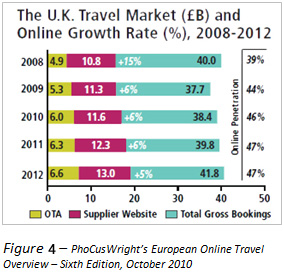 As well as this strong online penetration, there is also a robust Online Travel Agencies position in the UK Market. Despite a shrinking UK travel market in 2009, Online Travel Agency (OTA) bookings grew by 8.9% and captured a 32% share of the market. [13] By 2009, OTA gross bookings of €23.6 billion represented 35% of online sales in Europe Market, while supplier websites held the remaining 65%. [14]

Arguably another strong factor which enhances OTA position is the online shopping penetration. As internet shopping penetration continues to increase, OTA market share will improve regardless, no matter the position of supplier websites. Almost all short and midterm projections show that both OTA and Supplier Websites will increase their penetration.

[8] The Connected Kingdom – How the Internet is Transforming the UK Economy, The Boston Consulting Group, October 2012, Page: 7-8

[10] Survey on the attitudes of European towards tourism, European Commission, May 2011, Page: 41

Please check your e-mail for a link to activate your account.